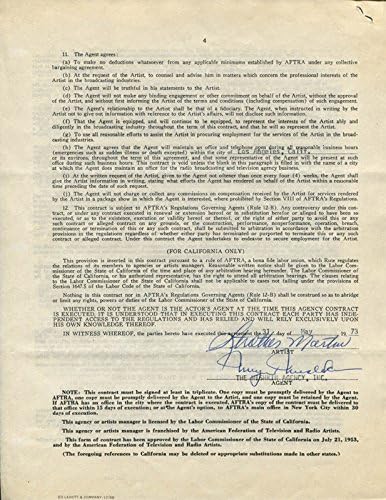 STROTHER MARTIN Standard AFTRA talent management contract with the Mishkin Agency Contract signed: "Strother Martin", 2 pages (front and back), 8½x11. Los Angeles, California, 1973 May 31. Standard AFTRA Exclusive Agency Contract, by which Martin retains the Mishkin Agency as his exclusive agent for a period of 3 years, commencing on the date of contract. The Agency is to receive 10% of money and other considerations earned by Martin under the terms of this contract. Among his many character roles Strother Martin (1919-1980) is probably best remembered as the sadistic prison camp captain in Cool Hand Luke, uttering the line, "What we have here is a failure to communicate." Martin, a former champion swimmer/diver who had been cast in athletic roles early in his career, later became noted for his villainous portrayals, especially in Westerns. His feature film credits include The Asphalt Jungle (1950), A Star is Born (1954), Strategic Air Command (1955), The Man Who Shot Liberty Valance (1962), McLintock! (1963), The Sons of Katie Elder (1965), Harper (1966), The Ballad of Cable Hogue (1970), Ssssssss (1973; Martin was bitten by a snake during the filming), Rooster Cogburn (1975), Slap Shot (1977) and The Champ (1979), and he appeared in a number of made-for-TV movies. Martin was also a featured performer on the series Hotel De Paree (1959) and Hawkins (nominated for a Golden Globe for Best Supporting Actor for his portrayal of Jimmy Stewart's cousin), and he guest starred on a long list of TV Westerns, such as Gunsmoke, Have Gun - Will Travel, Broken Arrow and The Virginian, and other series, including Perry Mason, The Dick Van Dyke Show, Bonanza, Marcus Welby, Baretta and The Rockford Files. Staple in top left corner. Lightly toned. Normal mailing folds. Light surface creases. Otherwise, fine condition. - Please contact us if you have any questions or require additional information. HFSID 310900

We believe food should be both healthy and delicious always.

Luckily, nature has a way of making perfect food when we treat her with respect.

That’s why our mission statement is simple:

To ensure your food was produced the way nature intended.

We leave no stone left unturned...

and ask all the right questions, so that you don’t have to!
We never use meaningless and misleading terms.
Transparency and traceability runs through every product line we carry.
From Ontario's best charcuterie to France's best cheeses to Italy's freshest pastas, we live to eat! Our food will get your body excited. The best local and imported ingredients, without the artificial garbage found in most of today’s food.
Fruits and vegetables that are certified Organic and nothing but, we don’t bait and switch. Gluten-free foods that actually taste delicious. Health supplements that are actually healthy.
We look at the labels so that you don’t have to.

Grocery delivery with a personal touch.

Every cut of meat is cut to order for you! The healthiest food, curated from the cleanest farms and best producers, hand-selected and delivered to your front door with care.

Click here to find out if and when we deliver to you.

We’re more than you think.

The Healthy Butcher was born from a passion for meat raised the way nature intended.
Our customers asked us to curate more than just meat, and we listened.

“The Healthy Butcher is the perfect intersection between healthy food and gourmet food.”

Organic & 100% Grassfed Meat. We are a full service butcher shop, offering every cut imaginable, and your order is cut to spec for you as you want it.
Sustainably sourced Ocean Wise approved fresh fish. We were the first Ocean Wise partner in Ontario.
Certified Organic fruits and vegetables... we don’t mix our apples. It’s Organic or we don’t carry it. And from local farms whenever possible.
Local and imported cheeses, curated by our friends at the Cheese Boutique.
Over 1,500 pantry items, from the best olive oils to the best pasta. We carry only the best combinations of taste and healthy, clean ingredients.
Delicious charcuterie from local and imported artisans making their products the ole’ fashion way.
Fresh bread, including sourdough and gluten-free from local bakeries.
Homemade Bone Broths, delicious pot pies and lasagne, and much more express gourmet options. Clean real food ingredients always.